Africa 3.0: What’s all this connectivity good for?

There’s been a dearth of posts on this site, not because there’s nothing to write about, rather we’ve been consumed with growing pains behind the scenes. That’s always a good thing but doesn’t excuse a lack of content. 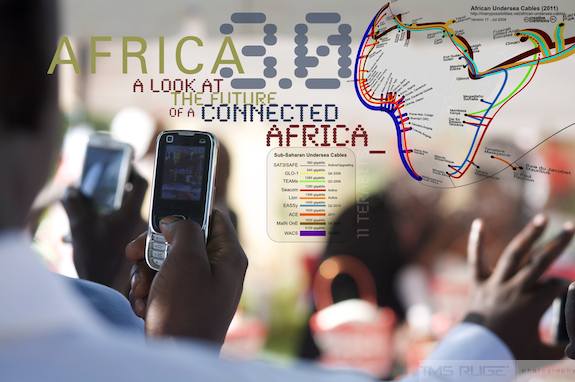 On March 14th, my long-awaited presentation at SXSW will be up on stage bright and early at 9 am in room 12AB. I’ve been looking forward to this presentation ever since it was accepted. I am in the throws of working on my slides for the presentation and I think I am putting something together worthy of opening up the conversation even farther on the future of Africa in the tech space.

After all, we know the past all too well. Sometimes I think too much of the past is written into the fibre of how we view Africa today, that it makes it hard to see through the forest of bad news. But when you stop and think about all the excitement going on the digital space over Africa—from cellphone penetration, innovation & incubation centers springing up across the continent, the Apple iTunes store launching in several countries across the continent—you get a sense that there is a whole lot of new just beyond the forest, just beyond the current “single story” on Africa.

That’s why I am excited. When you add up all the little bits of news and information in the digital space, it points to what could possibly be a great opportunity for Africa’s growth. Of course, I will have to caution myself from using the blanket “Africa” in this sense, because it would be amateurish of me to expect that ALL 53 nation states will seize the opportunity the way Rwanda is pushing ICT (not that it wouldn’t be a whole bucket of awesome!!) This would not be reality. Truth is, we have a whole mess of problems continent wide, and ICT is not going to fix them all, but it will make it easier to tackle many of our most pressing issues.

Last year at the Ars Electronica Cloud Intelligence Symposium, I had a chat with Danish Radio Broadcasting on the opportunities offered by, and the challenges we still face with mobile penetration.
PD Podcast: TMS Ruge on Danish Broadcasting Corporation
Cloud Intelligence: Africa’s Digital Divide

Mobile medicine, mobile money, mobile education, mobile as an employment industry and the entire ecosystem surrounding this booming industry all offer opportunities for growth. However they [currently] do little to address systemic abnormalities within governance. Actually “systemic abnormalities” is a nice way of saying “abject failures” in leadership. As an example, the lack of leadership foresight in countries like Angola, Sudan, et al in making disastrous deals with the Chinese is abhorring. Undertaking massive infrastructure projects completely built by the Chinese does nothing to address poverty. You will just have shiny streets that poor, starving, people walk on instead of being able to drive on.

Sure, we have oodles of broadband capacity landing on our shores in the next 18 months, but what does it all mean for us really? Allow me to inject a bit of skepticism into all this connectivity hoopla. How does this address all the genocidal maniacs on the continent? How does this address HIV/AIDS? How does this address the continued presence of leather-faced dictators drinking too much of their own Kool-Aid? Will aid dependency all of a sudden go away? Will Rob Crilly write a follow up book on Darfur praising the role of ICT in ending the conflict there?

Clearly, we have a host of problems to deal with that can not directly be addressed with connectivity. What increased connectivity offers, I think, is the ability to communicate faster to these issues. We get to collaborate faster, and with anyone on the continent and the globe. We get answers to simple questions on the internet. We get to tell our stories. We get to tap into global intelligence at the click of the mouse. Knowledge transfer on demand. The continent also gets to tighten its bond with its diaspora population. It will take time, but eventually, we will see the benefits of Africa 3.0 playing a roll in every development sector on the continent.

Q How does this address all the genocidal maniacs on the continent?

A In much the same way as the Internet helped in the removal of the genocidal maniacs in Serbia, led by Slobodan Milosevic. Similarly, fax machines are given a lot of credit in saving the Yeltsin government in Russia from a coup.

In this case, education and communications will permit the growth of effective civil society organizations to address political issues, human rights, and whatever else the population finds necessary.

Q How does this address HIV/AIDS?

A Education and communications directly address AIDS denial; the stigma of AIDS; the multitude of superstitions about HIV/AIDS; and personal and public health measures against HIV/AIDS, including the ABC program.

Q How does this address the continued presence of leather-faced dictators drinking too much of their own Kool-Aid?

A See genocidal maniacs, above.

Q Will aid dependency all of a sudden go away?

A Of course not. By my calculations, that will take 20-25 years after governments commit to universal broadband Internet and universal education.

Q Will Rob Crilly write a follow up book on Darfur praising the role of ICT in ending the conflict there?

A Could be, unless something else stops it before ICT takes hold there. Or it could be former UN Secretary-General Kofi Annan (Digital Challenge to Silicon Valley), or Nobel-prize-winning economists Joseph Stiglitz (Making Globalization Work), Jeffrey Sachs (The End of Poverty), or Amartya Sen (Development as Freedom), or Tracy Kidder (Mountains Beyond Mountains), or a number of other people.

You're right, ICT by itself is nothing. A glass pipe lying on the Mombasa beach. Its when Africans pick it up and start using it for what they want – the good, the bad, even the ugly – that we'll see real progress. It has to be integral to society to have impact.

Or look at its role in the USA. Only geeks had email in the early 90's, and only the elite in the late 90's, but it was when it became mainstream in the mid-2000's is when the impact really accelerated.