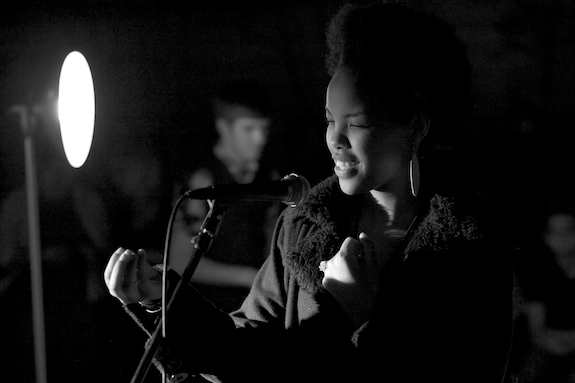 Amanda Mutamba Muhunde moves an audience with her spoken word

This past weekend, we attended Maurice Kirya’s performance in Denton, TX. Among the opening acts was a poetic by the name of Amanda Mutamba Muhunde. Her first poem, which was dedicated to raising awareness to the often glossed over victims of rape  in Africa’s many civil strifes, was shockingly raw, powerful, emotional and graphically detailed. Amanda pulls no punches in raising your conscious a notch or two as she lyrically details a woman’s account of her own rape, and her unfulfilled wish to no longer breath after the incident. Amanda skillfully walks you through the victim’s realization that even at the worst of it, there is purpose in the victim still having a voice and daring anyone who will listen to spread her story of pain, struggle and survival.

Here’s to us doing just that, and calling for other members of Africa’s Diaspora to no longer be quiet to the injustices belaboring our continent. Let’s speak up, and spread the word. They may only be words, but words can lead to a chorus for change, a chorus for change can lead to action, and action almost always leads to a sea change. Let’s all sustain the call for change. If you do feel so inclined, please feel free to post this video, which was captured by our very own Tracy Pell at the performance, on your site, your Facebook page or spread it own Twitter. One, because I feel that Amanda deserves a much bigger audience, and 2) the victims or rape the world over, not just Africa, deserve justice and a global response. Please do your part.

I really like your blog and i respect your work. I’ll be a frequent visitor.

I love this, great job Amanda. May good Lord bless you more and continue to guide you. I love that direction. God bless
Hope N

Next post: PD Catches up with Ugandan musician Maurice Kirya