Caution on the Zimbabwe Unity Deal, “as Mugabe wins again” 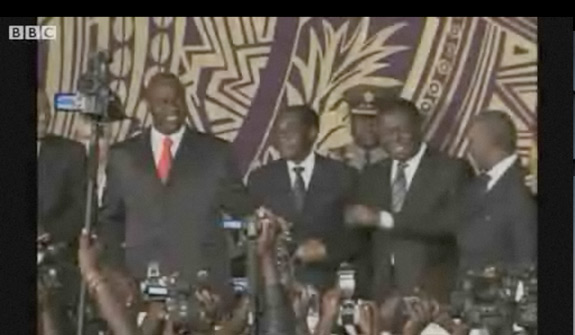 Now that the ink is almost dry on the dotted lines where the three leaders of the main political parties in Zimbabwe just signed their names supposedly on behalf of those they represent, it is time for the leaders to clear the tables of the wine and the cuisine and bring out the map of Zimbabwe and point the direction that the nation needs to take.

Notably the signing came on a day the world never forgets, Sept 11, and while the day is “famously” remembered for the gloom of the terrorist attack on the USA, Zimbabweans hope that they will remember this date for the “cautious” hope that can come from the signing of the power sharing agreement, as mediated by the South African President Thabo Mbeki.

After years of brutality and poverty inflicted on the people of Zimbabwe by the ruling Zanu PF party, the last six weeks have been torturous to those paying attention to the shenanigans of Mugabe and African politics in general. While the Unity accord of 1987 with the more regional Zapu party led by Nationalist Joshua Nkomo, was more of an internal affair for Zimbabwe, this government of National Unity agreement is more of an affair that will depend on the support of the whole world and will also have a bigger impact in the Southern African region and Africa in general, if it
works.

With virtually no formal economy, no agriculture, no jobs, no money, no water and electricity, no fuel, no food, no everything, the suffering masses would clutch onto anything that remotely represents hope like this deal which was all cobbled in secrecy and in many respects is for the benefit of those in political high chairs than the masses.

Optimism is the operative word here and the people have suffered enough, they surely will be optimistic of snow on a sunny day. And by signing this agreement the onus is on these leaders to see that it works. But for it to work, the people of Zimbabwe would have to rise above politics and the polarization that had become such a divide in our families, communities, and even in churches. The leadership has to lead the way. Make the people see it and believe it. Not an easy task but one that requires doers and not just Sayers. Tsvangirai, Mugabe and Mutambara must be seen together promoting peace and unity. If they can rise above partisan politics for the next five years, then certainly Zimbabwe will be restored.

Pessimism will also be inherent in most of us who are old enough to know Mugabe and his bag of tricks. He has proved time and time again that he is a political wizard and this latest deal is typically a positive result for him as he remains firmly in State House (white house) and nothing will change that much except that now he has a “runner” Tsvangirai who will be blamed for an failures of the proposed government as the manager.

While a lot of attention will be on how the two will manage the parallel or is it twin cabinets, the real issue is how the people will benefit from all this hoopla. Here in the United States Democrat Barrack Obama did not choose Hillary Clinton to be his running mate, mainly because there had been so much animosity between the two and a lot of rhetoric had been spewed in each other’s front porch. Bottom line it was not possible to heal the divide. One wonders how the MdC and Zanu PF expect to heal the divide, which in this case involves not only rhetoric but hate speech, murder and barbaric violence mainly perpetrated by the ruling Zanu Pf supporters against its opponents. One wonders also how the ragtag gangsters masquerading as war veterans will be rehabilitated, not to mention their victims, the women and children who were orphaned and widowed for the sake of the same political parties that now stand hand in hand and clink the champagne glasses in a toast.

Without a truth and reconciliation approach, and a healing process that requires accountability and forgiveness, the seeds of hate that Mugabe has for years relied on to hang on to power, will still terrorize people to the detriment of the unity agreement.

While as a journalist I am inclined to advocate for the liberation of the media for the selfish reasons of hoping to get my career back online, I also urge that this bee one of the first priorities of the agreement as the media will certainly bring the checks and balances that this agreement needs to succeed.

As one living in the Diaspora, this new development may change the game plan of many Zimbabweans living abroad. Humans and especially professionals are the number one resource for any development that will be needed in Zimbabwe, and as such there will be a need for patriotism and hopefully Zim Diasporans will rise up to the challenge and repatriate their skills back to Zimbabwe. With all the knowledge that most have gained certainly the nation will benefit.

Of course this agreement does not represent the best aspirations of most Zimbabweans as they would have loved to see Mugabe’s behind as he heads into exile, but it surely does give us a starting point and a near peaceful approach where there are no winners and no losers. If this works Zimbabweans will forever be indebted to Thabo Mbeki and his slow but sure pace to a peaceful agreement that seemed elusive to the whole world. But a failure of this unity will surely be celebrated as “we told you”.
After all we are dealing with one of the craftiest politicians of our century named Mugabe.

Norman is Zim Diasporan living in Dallas, TX and is a regular contributor to Project Diaspora