Celebrities Ready to Save Darfur 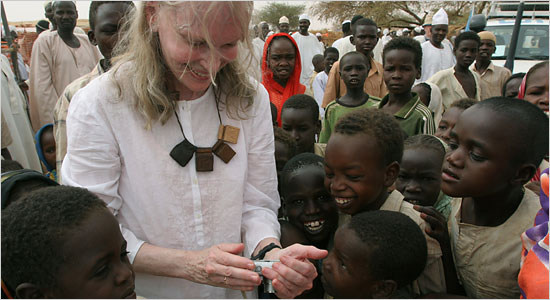 Ok, I have to admit that I am always a bit suspicions of attempts by the Hollywood elite to “do good”. At best they usually don’t have a deep enough knowledge of the problem. At worst they are purely self-serving and to do nothing more than polish their gleaming Hollywood stars; leaving dashed hopes behind. Well meant dollars wasted on programs that are poorly concieved, poorly designed and poorly implemented. But today, I have to say I am proud of them. This time they are doing what they do best… (other than make movies) getting the attention of the media. Steven Spielberg quit as Artistic Director of the Beijing Olympics due to China’s lack of opinion on the situation in Darfur.

Sudan supplies China with oil and lots of it. In January of 2007 Council on Foreign Relations reported:

China’s voracious demand for energy to feed its booming economy has led it to seek oil supplies from African countries including Sudan, Chad, Nigeria, Angola, Algeria, Gabon, Equatorial Guinea, and the Republic of Congo. The U.S. Energy Information Administration says China accounted for 40 percent of total growth in global demand for oil in the last four years; in 2003, it surpassed Japan as the world’s second-largest oil consumer, after the United States. In the first ten months of 2005, Chinese official sources say, Chinese companies invested a total of $175 million in African countries, primarily on oil exploration projects and infrastructure. On January 9, state-owned Chinese energy company CNOOC Ltd. announced it would buy a 45 percent stake in an offshore oil field in Nigeria for $2.27 billion. China already has a significant presence in many African countries, notably Sudan: China takes 64 percent of Sudan’s oil exports. “China is very deeply engaged in exploiting Africa’s oil resources,” says Elizabeth Economy, C.V. Starr Senior Fellow and Director for Asia Studies at the Council on Foreign Relations.

Sudanese production and export of light, sweet crude—the most easily refined, and therefore most desirable, oil—have risen rapidly in the last few years, with Sudan’s Energy Ministry reporting production of some 500,000 barrels per day in 2005 despite internal upheaval, including the unrest in the northern region of Darfur. Sudan has proven reserves of some 563 million barrels of oil, with the potential for far more in regions of the country made inaccessible by conflict. Sudan is one of the world’s poorest countries.

China has been supplying arms to the Sudan since 1965.

Arms Trade between China and Sudan
China was not new to Sudan. By the time it invested in GNPOC in December 1996, it was already a familiar arms dealer to many Sudanese governments. The Nimeiri government (1969-85) bought weapons from China. But these purchases rose in the 1990s due to Sudan’s internal war and the promise of improved finances and enhanced international credit derived from its oil potential. Weapons deliveries from China to Sudan since 1995 have included ammunition, tanks, helicopters, and fighter aircraft. China also became a major supplier of antipersonnel and antitank mines after 1980, according to a Sudanese government official. The SPLA in 1997 overran government garrison towns in the south, and in one town alone, Yei, a Human Rights Watch researcher saw eight Chinese 122 mm towed howitzers, five Chinese-made T-59 tanks, and one Chinese 37 mm anti-aircraft gun abandoned by the government army. Human Rights Watch concluded that while China’s motivation for this arms trade appeared to be primarily economic, China made available easy financing for some of these arms purchases. Human Rights Watch

China is complicit in the truly awful situation in Darfur and the continuing unrest between Sudan and Chad. China refuses to acknowledge that they play any part in the politics of the region. In a statement released after Mr. Speilberg quit, China states:

“As the Darfur issue is neither an internal issue of China, nor is it caused by China, it is completely unreasonable, irresponsible and unfair for certain organizations and individuals to link the two as one,” said a statement issued by the Chinese Embassy…”

China is cutting deals all over Africa with corrupt governments, helping themselves to precious resources with no consideration of the consequences of their actions. They are a participant in the politics of Africa… saying it is not so does not change the facts. They have the power to further destabilize the Sudan and Chad or participate in finding a solution by exercising their considerable political and economic influence.

Well, Hollywood heavyweights are ready to take on the Sudanese and Chinese governments.
Steven Spielberg

I find that my conscience will not allow me to continue with business as usual,” Spielberg said in a statement.

“At this point, my time and energy must be spent not on Olympic ceremonies but doing all I can to help bring an end to the unspeakable crimes against humanity that continue to be committed in Darfur.

“Sudan’s government bears the bulk of the responsibility for these ongoing crimes but the international community, and particularly China, should be doing more to end the continuing human suffering.

“I have decided to formally announce the end of my involvement as one of the overseas artistic advisors to the opening and closing ceremonies of the Beijing Olympic Games.”

For there is another slogan afoot, one that is fast becoming viral amongst advocacy groups; rather than “One World, One Dream,” people are beginning to speak of the coming “Genocide Olympics.”

Her extremely strong critisim of Mr. Spielberg for working with the Chinese helped to shine a really bright light on China and Darfur and lead Mr. Spielberg to his announcement today.

Steven Speilburg timed his exit perfectly. With China and the world gearing up for the event this year… well, we were bound to notice that Mr. Spielberg does not want to play in their sandbox anymore. Mia Farrow has been beating the drum for a while and is pretty emphatic that people of influence need to take a stand and force China to use its influence in the region for the good of the people and not just for their own self-serving agenda. Corporate sponsors are next on the chopping block.

And while we can’t all have the influence of Mr. Speilberg and Mrs. Farrow, we can vote with our pocketbooks and not support these Olympic sponsors. Hit ‘em where is hurts.. China wants to impress the world with these Olympics… its time to let them know that the world is unimpressed with bullying self-serving governments who have no interest in a stopping the Genocide in Sudan. The best thing we can all do is notice, pay attention, and use our voices… if it matters to the world then change will happen. If we turn a blind eye… it will continue.

One more group of Celebrities that deserve praise for their willingness to use their time with the media to shine the light on China and Darfur… Athletes. Team Darfur is dedicated to raising awareness about the situation in Darfur. From their website:

Team Darfur is an international coalition of athletes committed to raising awareness about and bringing an end to the crisis in Darfur, Sudan. A campaign leading up to the 2008 Summer Olympic Games in Beijing, Team Darfur aims to educate the global public through the unique voice of elite athletes. Team Darfur brings together the world’s Olympic and professional athletes to put international pressure not only on Sudan, but also on those countries that support the policy of inaction in the face of this dire humanitarian crisis. On August 8th, 2008 the Olympic Games will begin in Beijing, China, and the world will turn its attention to the exertions of the globe’s greatest athletes. But we also want the world to turn its attention to something no one has done enough to stop: the slaughter in Darfur, which has left hundreds of thousands dead and millions in dismal refugee camps.

We have all see the dashed hopes the Olympic boycotts have caused Olympic athletes and these athletes have found a way to avoid a boycott but still raise their voices. I commend these men and women for staying true to their beliefs while at the same time pursuing their personal goals. Change can happen and individuals can make a difference. So thanks Mia, Steven, and everyone else who is willing to take a stand and not back down from the ugliness we are seeing in China and Sudan.

Previous post: Obama is the Hope for Africa too