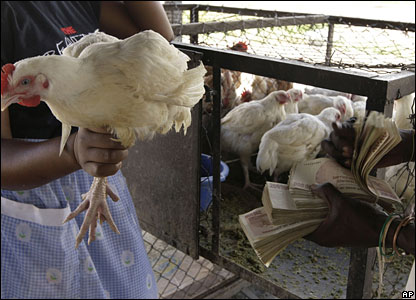 The BBC Africa web site has posted this week’s image gallery. Featured are a couple of photos I found at once humorous and gut-wrenchingly sad. Humorous because the subject matter clearly illustrated our previous frustrations with Mugabe, and sad at the same time because it is clear-cut proof of how desperate the situation on the ground is.

It is even sadder to realize that even if economic relief was anywhere around the corner, halting and subsequently reversing Zimbabwe’s runaway inflation will take decades. Idi Amin’s pea-brained economic policies didn’t do favors for Uganda’s economy, and 20 year’s later, she’s still trying to climb back to her former glory.

Incidentally, if I was that chicken I’d be rather offended for being bartered for a roll of toilet paper! As if cutting my head off wasn’t enough of an insult!

Ahead of this month’s general and presidential elections, here’s to hoping that Zimbabwe wakes up finally and demands change.

Good site I ”Stumbledupon” it today and gave it a stumble for you.. looking forward to seeing what else you have..later