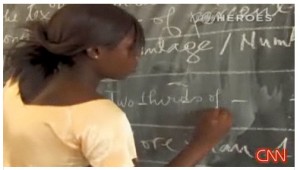 Congratulations to all the members of the top 10! The work done by all these amazing people is inspirational and truly a model for all us that want to make a difference in the lives of others. In the group there are three members of the African Diaspora all working in unique ways to effect the situation back in their home countries.

Viola Vaughn is more of a Reasporan… a native of Detroit who found a home in Senegal. Her mission has been to provide educational opportunities for girls. She founded 10,000 Girls aimed at giving girls and education and marketable skills they could use to support themselves and their families.

Vaughn learned that the regional pass rate for girls was low because it was rooted in the economic need of young girls to work at home. They begin missing classes, then failing exams, often ultimately failing or dropping out of school. So in 2001, Vaughn turned her grandchildren’s bedrooms into classrooms and began supplementing girls’ education. “I found every one a girl younger than she and said, ‘You’re responsible to make sure she learns.’ I taught them how to teach each other.” It worked. In two years, the group of girls had grown to 80 — and they were succeeding in school. With a grant, Vaughn was able to hire teachers, and the program continued to expand despite her attempt to set a limit of 100 girls. “The girls wanted to take it to 10,000,” says Vaughn.

“Most Ethiopian children have only access to textbooks in the classroom,” says Gebregeorgis. “Books children read outside of school, those are the spices of education.” It wasn’t until he became a children’s librarian in the United States that he realized what the children of his native home were missing. Forced to flee Ethiopia to the United States as a political refugee in 1981, Gebregeorgis ultimately put himself through university, obtaining a graduate degree in library science. He relocated to the Bay Area, taking a post at the San Francisco Children’s Library in 1985.

Marie Da Silva of native of Malawi living in Las Angles, knows first hand the raveges of AIDs in Africa. She lost 14 members of her family to the disease. Moved by the plight of the children in her home village she founded The Jacaranda School to provide a place for AIDs orphans to get an education.

In 2002, Da Silva learned that the school in her southern Africa home town was going to close. Consumed with concern for the students, she urged her mother to let them gather and learn in their family home, with her financial support. “All the while I was doing my best for the kids here — making sure they’re doing their homework, eating well,” she remembers. “I couldn’t sleep just thinking about the children that need the same thing back in Malawi,” says Da Silva. Thanks to Da Silva’s passion, the school is now thriving in her childhood home and more than 200 children, most of whom are AIDS orphans, receive porridge every morning and education, free of charge. It is an effort that Da Silva funds almost entirely herself, sending $1,000, about one-third of her monthly paycheck, to pay the salaries of 12 teachers and the headmaster, and purchase whatever supplies she can afford.

Read more about her here

Previous post: Can the Kickstart model change the face of Aid to Africa?