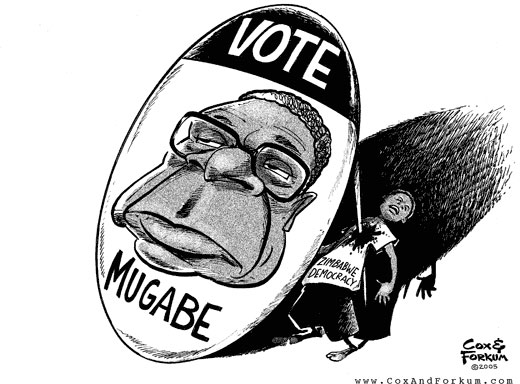 For voters in the recently held presidential and general elections in Zimbabwe, the choices were very limited and the issues so clear.

“You want to be hungry, unemployed, uneducated, and immobile, without dignity and sewer spewing in front of your house, then vote for Mugabe and Zanu PF. If you want none of these vote MDC and Morgan Tsvangirai for president.”

And the people spoke. Or did they? Well without the official results, we will never know but with Mugabe already planning for a run off, with the MDC, it is certain he did not win. With the Zimbabwe electoral commission taking forever to announce the results, one wonders if they would have done that if Mugabe had won. But as much as they can delay and hide the truth from the people, by not announcing the official presidential results, the truth is out by insinuation. Mind you this commission is handpicked by Mugabe himself and in all cases reflects the patronage that has been synonymous with his leadership for the past 28 years. Numerous Zanu PF heavy weights have lost general elections only for Mugabe to bring them back into government through such creations like the Zimbabwe Electoral Commission which in reality is just a de facto extension of the ruling party. This commission would have crowed from rooftops if Mugabe had won. In our language we say “rine manyanga hari putirwe” meaning what has horns can not be wrapped up otherwise the horns will stick out the packaging revealing the contents. What we are seeing now is a case of the horns sticking out. Mugabe lost the election.

So is there a need for a run off? Constitutionally yes, if his challenger did not get at least 51% of the votes, but will it change the outcome, I strongly disagree. The same voters who voted against him will do the same. What will be so different is the violence that Mugabe will this time unleash on his opponents for showing him in the ballot how badly they want him gone. We have seen this happen before. In the 80s Mugabe unleashed the North Korean trained 5th Brigade on the people of Matabeleland for daring to support Joshua Nkomo his nemesis. More than 20 000 people lost their lives and Mugabe never apologized.

In 2000 after the National constitutional referendum, in which the people voted against the government sponsored ideas of entrenching Mugabe in power forever, Mugabe with venom on his lips unleashed the hoodlums from the tough neighborhoods of Mbare and the rag tag so called War Veterans like Joesph Chinotimba and Chenjerai Hunzvi to attack his opponents and particularly the white farmers for having supported the formation of a new political dispensation spearheaded by the Movement for Democratic Congress led by his erstwhile Trade Union leader and former Zanu Pf card holder Morgan Tsvangirai.

More than a dozen farmers were butchered and hundreds maimed for life. The ever green farmlands became desolate and village gangs occupied farmhouses stripping everything in them and selling for cash. That campaign of violence did not stop and people braved it hoping that in 2002 they would cast their votes and end the violence, but Mugabe would not let them have peace as he literally stole the election. Another six years seemed like eternity as people patiently and peacefully waited for yet another chance to tell him to go in a democratic process. And to have Mugabe get away with this one, is sentencing the people of Zimbabwe to death.

History aside, one wonders really what Mugabe wants to preside over. A country with such an unprecedented high inflation rate, more than 100 000 percent, high unemployment, more than 80 percent, taxation for the 20% employed has skyrocketed to about 60%, education and health totally collapsed with patients having to bring their own medicine, food, bedding, water etc and school kids spending weeks on end playing soccer the whole day for lack of teachers. Grocery stores so empty not even a piece of gum can be found, sewer spewing all over the streets and garbage uncollected for months, not even a drop of water from taps for days on end, electricity has become a luxury that even the electoral commission wished for as they had to count ballots by candle light. The social and economic fabric is now non existent, so is a democratic political process. It is all such a fuss.

The international community has kept an eye on the goings on but with a dictatorship like this one, the quiet diplomacy as advocated by President Thabo Mbeki of South Africa is exactly what Mugabe is hoping for. Basically Mugabe and his cronies are testing the waters to see how far they can go with this and buy themselves a few more months if not years in power in the absence of pressure from anyone. And as we speak the strategy is to create enough chaos so the military can openly rule under the auspices of a state of emergency. The people of Zimbabwe and in particular the MDC should never allow this and the same goes for the international community. Otherwise they will be blood shed in Zimbabwe and the destruction of the little of what’s left.

But Zimbabweans in general are disappointed, angry and giving up. Two days after the elections, many found their way back to work before the results had been officially announced a sign that they did not see anything changing after all. And to Mugabe it gave him the impetus to continue as if nothing had changed. We are now two weeks after the elections and reality on the ground is as if no election ever took place in Zimbabwe except for campaign poster still flailing in the wind and murmurs here and there about a stolen election. The War Veterans are back on the streets with renewed vigor and re-armed. The remaining few white-owned farms are being freshly invaded and farmers told to leave. The mandatory 21 days after an election, allowed by law for the Commission to hold a run-off are almost over. The challenge by the MDC to have the results announced is in the High Court and as usual it is going to take forever to hear the verdict. By then Mugabe will have caused so much chaos in Zimbabwe, beating up his opponents and provoking them to fight back, creating an excuse for him to declare a state of emergency and rule by decree. Once this happens you might as well forget about the run off or any settlement and with life expectancy in Zimbabwe at the lowest average of 35years, most of us will be dead before we attain independence from Mugabe.

Zimbabwe celebrates its independence from the colonialists every year on 18th April, we wait to see if Mugabe will pompously mark the celebrations as he has always done for the past 28years as president and without a miraculous settlement to the political problem right now, one would wonder in what capacity he will do that since he has not been declared the winner and he is not.

Next post: One PHDs Response to: Why Haven’t Our PHD’s Caused Development in Uganda