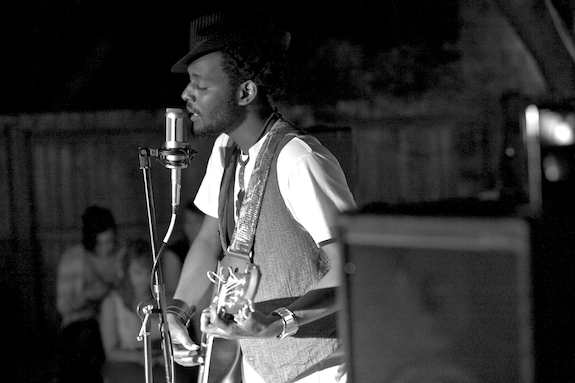 A week ago, team PD had the pleasure of being invited to attend a rare US performance by one of our favorite Ugandan musicians, Maurice Kirya. It was an intimate performance in Denton, TX, home of the music factory known as the University of North Texas, responsible for the careers of such crooners as Norah Jones and Harry Connick, Jr. The performance – in Art Six Cafe’s outdoor patio, kicked off with a number of opening acts including Amanda Mutamba Muhunde‘s spoken word and a rare acoustic set from Every Explosive Ending. A very fitting environment for Maurice’s jazzy and soulful sound.

After the concert, I caught up with Maurice outside one of Denton’s most famous watering holes (oh the memories!). We waxed poetic about the state of Ugandan music, Maurice’s unique twist on Ugandan soul, and his one-man mission to tell the world that Uganda is ready to stop onto the global music stage. Maurice also echoed what I have always believed to be true, that we as Africans need to start to take to the microphones and tell the good news about Africa. It is not always cloudy and full of doom and gloom on our continent. We need to shine light on the other side of the coin that is this magnificent continent.

I am sure there are other individuals out there spreading the good news on Africa. Soon enough our voices will merge into one beautiful chorus of good news. Let’s hope this is sooner rather than later.

For more on Maurice, you can catch up with him on Facebook, Twitter and his website, which has some audio samples from his latest CD. Additionally, don’t forget to check out his Youtube channel for some of his videos. I’ve also uploaded some photos I took at the performance.