“political witches and political prostitutes” wipe their arses too 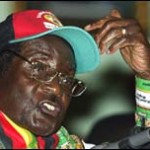 The seemingly indestructible Robert Mugabe is at it again. This time taking the podium to denounce his rivals as, “political witches and political prostitutes“, among other choice names he dished out to his rivals in the upcoming “election.” Mugabe is running for his 6th presidential election. We here at PD have a problem with this being termed as an election. We all know a good dictator never loses an election. They might lose, but never an election.

Since when did Democracy’s voting process allow for the incumbent to order the voters to vote for only him or else? Robert, seriously, we know you didn’t get much of an education, but this charade of a campaign process you are running isn’t pulling the wool over anybody’s eyes. I think you’d get more respect by summarily denouncing all future presidential elections and joining the hall of shame of “friendly” dictators. At least then, you’d have evidence that you’ve actually accomplished something, and worthy to be listed among the greatest, or most disillusioned, however that ranking system works.

It begs the question as to what is your platform this time around? I mean do you even need a platform? I have a suggestion, how about putting more invisible bread in the stores? Providing free Chinese wheel barrows for people to push their worthless money to the shops with. Or, even better, how about a presidential decree to “let them eat cake,” since there’s no bread in the shops. If you truly are a dictator worth your salt, you’d sit back and dare anyone to vote for your rivals. I mean, if you are already having your cronies order all prison guards to vote for you, why stop there? Order the whole country to vote for you. Never in the history of modern democracy, has a single man made a mockery of the presidential position and electoral process. Well, given another term, this guy would certainly give you a run for your money.

It befuddles the collective imaginations of those of us in the Diaspora why and how is it that you are still in power. You’ve single-handedly ransacked one of Africa’s diamonds in the ruff agricultural economies, set records with your inflation policies, and now you are threatening the diamond mines? Zimbabwe once hosted the 1990 Davis Cup!

This from The New York Times:

How bad is inflation in Zimbabwe? Well, consider this: at a supermarket near the center of this tatterdemalion capital, toilet paper costs $417.

No, not per roll. Four hundred seventeen Zimbabwean dollars is the value of a single two-ply sheet. A roll costs $145,750 — in American currency, about 69 cents.

About that eduction you didn’t get in your British-sponsored tortured child-hood. If you had a sliver of a lesson in economics, you’d know that printing money doesn’t solve your ills, nor does it address your cluelessness. It didn’t work for Idi Amin and it certainly isn’t going to work for you.

But, actually in hind site, thanks for adding another notch to your list of accomplishments. When the number of plys on a toilet roll are out-numbered by the bills it takes to buy one, it doesn’t take a primary education to figure out that one can do without toilet paper.

Congratulations, Robert. You are now the proud ruler of an entire nation that uses your face to wipe it’s collective arse.