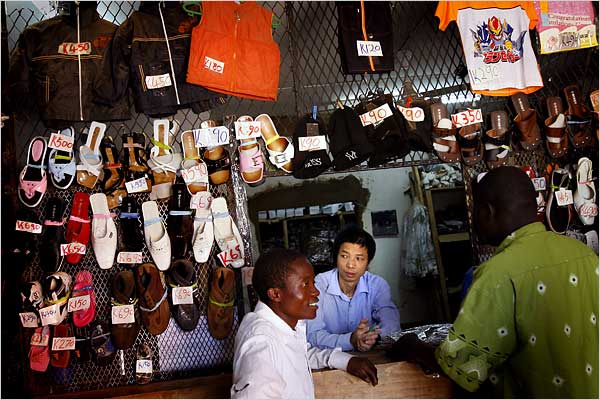 It is unprecedented. Only in Zimbabwe does one get arrested for laughing at the poor quality of Chinese goods. You can get away with an inward laughter in public or laughing behind closed doors in your house of course, but don’t let Mugabe’s police hear you rubbish Chinese goods. Doing so is a “bad” reflection on the Zimbabwean government and also on “our dear friends” ‘the Chinese. Being a Zimbabwean, but being here in the United States, I guess I can laugh all I want and I can even write about it. The words that actually get you in the slammer for a couple of days if not weeks, and live on a matemba (small dried fish) in a pool of boiled water for soup diet, are Zhing Zhong!, a phrase Zimbabweans coined for all things Chinese.

With the current economic melt down and lack of credible trading partners, the Zimbabwean government has issued a blanket invitation to the Chinese government and companies to ravage the country and bring in whatever they have to sell to the restless public. So far the Chinese have not disappointed, taking over every market, and building more market stalls for their goods. They seem to always have in surplus; thanks to the cheap labor in Hong Kong. However what is disturbing, cheap as the goods are, is the poor quality. These goods do not last as long as goods from other manufacturers, if at all.

A cousin of mine was pleased to finally have a color TV for his family. His joy however, did not last even one night. In fact, the US$500 equivalent TV, did not last 10 minutes. What happened was that when the power went off as is the norm in Zimbabwe, the TV set made a strange sound… probably a death sound. My cousin could smell burning components, but he decided to wait till power was restored to check what had gone wrong and if  it would turn back on. The wait was long and power eventually came back on in the wee hours of the morning the next day. To his despair, the TV had ceased functioning. So as I expressed my heart felt condolences on the death of his family’s new electronic gadget (bought with their last savings and borrowed money from neighbors) I asked him what brand name it was. To my shock he had no idea. “It is from a Chinese shop in downtown Mbuya Nehanda Street. I have no idea how to pronounce this name. Zhi zhe zhu something” he gave it a try. When I asked him to spell it out for me, I knew it was a waste of time for me to try to pronounce the name. I suggested that he return it to the shop and ask for his money back, I was certain it had a warranty. To my dismay, he had already done that and was told that the goods are sold as they are with no warranties. The shop owner blamed it on the electricity problem and totally refused to be responsible. Imagine this happening to me here in the US; I would make ten times the price of the TV in a lawsuit! So much for living in a free world.

Actually, the whole thing got me thinking; what happens to all the Chinese toys that developed countries like the United States and Europe refuse because they have too much lead in them? Does anyone really think the Chinese would dump them in a big pit and set them on fire or send them for recycle? I bet you… most of these goods end up dumped on the African markets where governments have no means to test for lead and also really don’t care one way or the other; unless it is to see that people have cheaper goods and keep them happy so they won’t revolt. So who is going to protect the poor African child from an affordable yet lead laden Barbie doll from the Chinese Stall? And who is going to hold the Chinese accountable for proper business practices like warranties? Certainly not African governments like Zimbabwe. More disturbingly even with such blatant injustice and unscrupulous business practices, the Chinese are getting away with it all over the third world.

The Zimbabwean government even goes so far as to protect these kinds of malpractice. They don’t want to upset the Chinese. Who, as it is right now, are the only reason the government is not collapsing. For Mugabe, the Chinese connection goes way back to the struggle for independence. The Chinese provided armaments to the black populace so they could fight the colonial powers. It is unfathomable for the Zimbabwean government to allow the public to express displeasure with Chinese goods and services. Thus, I am told, being overheard saying Zhing Zhong by law enforcement agents could easily earn you a trip to the Sheriff’s office downtown. But if you are like me, currently living with the luxury of freedom of expression, I can safely say Zhing Zhong and not look over my shoulder.

Next post: Zimbabwe Breaking Records for All the Wrong Reasons