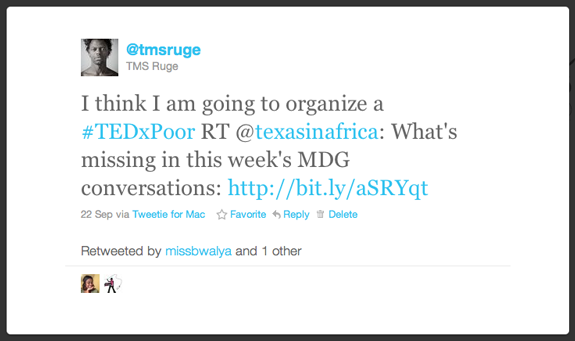 The idea of TEDxPoor was born out of a Twitter discussion during UN week in September. The ongoing review of the Millennium Development Goals (MDGs) left a lot to be desired. For starters, the voices of those that could best benefit from this conversation were left unheard. Too often entire conferences and summits are held on the subject of “the poor” All too often they are discussed as faceless, voiceless individuals who never get an opportunity to participate in the global discussion about them. The discussions on Twitter were that something was decidedly missing from the dialog. Laura Seay, assistant professor of political science at Morehouse College, attended several of the conferences that week and had this to say:

“While there is a lot of discussion of the need to capture human capital in developing countries, we didn’t hear from anyone who had actually lived the experience of escaping poverty. We didn’t learn how families survive on $1 a day from people who have no choice but to make it work.”

In the spirit of the moment and the discussion, I offered to take the microphone to these so-called “poor,” so the world could get a chance to hear their voices and opinions; many of whom have never heard of the MDGs.

TEDx’s online registration application has been offline nearly the whole time. This has provided ample time for me to rethink this whole idea and wether or not a TEDx-branded event in the village was what I was trying to accomplish. Leveraging the TEDx brand absolutely has its advantages. The TED Talks video library is probably the most inspiring online catalog of moving images. The TED conferences have made strides to include voices from the African perspective into its talks. Various African visionaries have shared their inspiring ideas; George Ayitteh, Andrew Mwenda, William Kamkwamba, Chimamanda Adichie, Ory Okolloh and Ngozi Okonjo-Ideal to name but a few. A TED conference was held in Arusha, Tanzania in 2007. I also had the opportunity to speak at TEDxKigali this summer. The TED community even announced a partnership with Nokia to bring bundled TED talks to Africa on Nokia N8 all-in-one phones. These are all great and welcome initiatives, but I am sure you know what I am about to say. We’ve seen this model before. Many times. Successful initiatives imported onto the continent, turning us ever more into consumers and passengers as opposed to mechanics and drivers; spectators to the shaping of our own collective destinies.

Western academics wax poetic about their research methodologies and theories into how or if we (the poor) can achieve the MDGs, even going so far as to engage in intellectual sparring over each other’s development methodologies. Why is our development the rightful occupation of Western academics and armchair development pundits, and the rich and famous? I think they all really miss the point. Albert Einstein once said, “if we knew what we were doing, it wouldn’t be called research.” I am not an academic, nor do I think that I was ever cut out for such a vocation. I am happy being drunk with can-do idealism that things can work much better for those affected, that things could be much simpler; one does not need 15 years or (50 years for that matter) of research figuring out how. Let’s just do it already.

This is a call to action for the creation of a completely new platform. A departure from the norm. Let’s build our own podium; where the world can meet us, the faceless “poor.” While we may not consider ourselves poor, the world, does. I include myself because this is my community, my village, my family. This is a chance for us to contribute our not only our voices to the discussion, but to also showcase what we are already doing to advance our own communities. I think too often the world forgets that there are real people behind the stats, research goals and projections; people with opinions, ideas and smarts. As Seay said, people who, against the odds, thrive earning $1 per day. I think it is time for us to share our ideas on what, (if anything) we can do to participate in our own economic emancipation. Above all, there has to be some value in sharing how we survive averaging $1 per day. If you can do that, are you really poor or an efficient minimalist? While the label of “poor” is generally attached to the those living under the $1 per day economic threshold, is it necessarily a bad thing if you can feed, house, clothe and educate you children?  Is it easy to do? Not in the least. Could we stand to rise above that in pursuit of a better quality of life? Absolutely! The state of Poor is relative.

I’ve espoused many times the need for us Africans to politely take over the reigns of our own development. No longer do we need the steadying hand the West has had on our shoulders for half a century. The journey to equilibrium requires that we experience both failure and success to appreciate what balance is. Eventually, we must become the architects of our own development. We must become our own advocates.

Introducing the first Villages in Action Conference
Twenty minutes outside the small town of Masindi, Uganda is a village called Kikuube. There are over 260 homesteads with a population just over 1000. The local council member representing the village is none other than my Mum, whom I am sure you have met. In talking to her about this conference, I was surprised that she—as a village leader—had never heard of the MDGs. Yet she goes about her day fulfilling tasks meant to improve the welfare of her community; from educating her community about the use of bed nets, to regular home inspections enforcing sanitation codes, to empowering women with micro-loan programs. What does it say about the MDGs when the very people that are supposed to be beneficiaries don’t even know about them?

On Saturday, November 27, the microphone will be mounted stage center in this little quaint village. We welcome the world to join us in a frank discussion on the state of poor. We’ll discuss the MDGs and what our role is in achieving them by 2015 (and what we were already doing). Let’s talk about how we survive. How big a role does commercial farming and the various small-scale entrepreneurial activities contribute to our development. I want to challenge the notion that the sustainability of our communities depends on intervention from the West and that we are willing to take up the responsibility of developing and managing ourselves. I’d like the world instead to come to my village (and hopefully soon enough, to other villages) to see how we “manage.” Not in the sense of “poverty tourism,” but in a genuine exercise of actually listening to and engaging with us.

“How can I help,” you ask?
Good question. With such a short throw window, we’ll need all the help we can get. From volunteers, to sponsors, to live tweeters and bloggers. The word needs to get out about this conference, so if you can space a few column inches about this new platform, please do support us with a paragraph or two. A live stream of the summit would be fantastic, so we’ll obviously need tech assistance pulling that off from a remote village. This is not entirely impossible with the right partners in place. So if this is your field, please do get in touch. If you would like to lend us some financial assistance instead, you can do do so at various levels below. We’ll give as much credit as deserved to everyone who contributes to pulling this off. So thanks in advance and do check back in the coming days as more details are released. As expected, we welcome as much Diaspora participation as possible!

I so inspired and in love with the idea. Please keep it up and goodluck.