The 76 – Lives lost and a nation changed 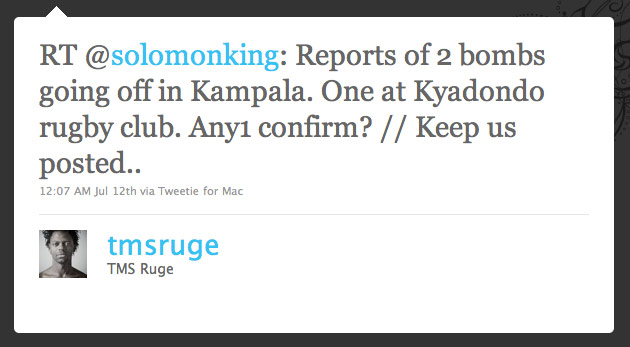 In the last 7 days, I have been on three continents and my feet have touched down in four countries. Dopplr says I’ve added in excess of 1,659 kg CO2 to my carbon footprint. My body feels like a stubborn piñata, beaten to a pulp, but hardly broken. My mind has absorbed, contemplated, calculated, commiserated and generally tried to make sense of the world around it. South Africa successfully concluded hosting the world’s biggest sporting competition; BP stopped it’s 3 month effort to fill the Gulf of Mexico with oil; Steve Jobs turned on his reality distortion field to quell “antennaegate,” and Washington, DC was hit with an earthquake.

My heart however, has been stuck in a geosynchronous orbit around Kampala, Uganda.

As of this posting, it has been exactly a week since Spain beat The Netherlands to stand alone atop the World Cup throne. The world watched, in celebration and disappointment as the games crowned their final champion. In Africa, many gathered in make-shift pool halls, barber shops, local beer joints or “locals,” or anywhere where there was a TV or radio tuned to the proper channel broadcasting the game.

In Uganda, 76 people did not get to see the final results of the game. They had began their day in frenzied preparation to finish whatever the day required them to accomplish in time for the match. Some went to pray, others went shopping for sports jerseys emblazoned with the colors of whatever team they were in support of, some had lunch with friends and placed bets with each other. Others made plans to meet at pubs or restaurants to enjoy the final game. None, it would seem, made plans to die that day.

Seven days ago, the Somali Islamic militant group, al Shabab, or “youth” detonated a series of bombs in Uganda’s capital of Kampala which injured hundreds and left the city with 76 less people that I will never get a chance to meet. An outdoor gathering at the Kyadondo rugby club was hit by a suicide bomber, while simultaneously another bomb hidden under a table ripped through Ethiopian Village, a popular restaurant and socializing spot for tourists and expats.

I ran across the news while sifting through the day’s tweets. I’d just returned from a dinner with colleagues I hadn’t seen in a while. One of them, left the dinner early to go watch the start the game with her father. Earlier before the dinner, I’d sped past the rugby club across from Lugogo Mall on Jinja Road, straddling a boda boda taxi. I’d just spent the day sifting and editing images at the Hive Colab offices. The air was crisp and the sky was clear as evening was setting in. The rugby club gates were busy with activity as the early arrivals filtered in to grab the best seat on the field.

The first tweet was from non other than Solomon Benge (@solomonking). Solomon tweeted from the front lines during the Kampala riots a year before.  I didn’t think much of it at the time, but I was curious enough to stay tuned while he confirmed the report. Soon enough there was a flurry of reports coming out. I remember a heavy sense despair descended on me as I sunk into disbelief. The winner of the final had just been announced, and the orange-clad Dutch expats were filtering out of the bar at the hostel, in dejected disbelief. I watched the Twitter stream a few more minutes before it occurred to me that I should start accounting for my team. “We are OK, are you?” “Have you heard from so-and-so? No, have you? Call them and I’ll call you back.” Within minutes everyone was accounted for, on the way or home and safe. A few hours later I was replying to Facebook messages and tweets; “team PD was accounted for and safe.” The news was now international, struggling upstream to break through the tide of World Cup coverage.

What amounted to a cloud of numbness occupied my soul for the two days before I was to board for my flight to Dallas. I took meetings in a daze of disbelief, meetings that were occupied with discussions of who was responsible, digesting the gory images in the tabloids of limbs and blood. The images were arresting and the same time disappointing as it seemed every newspaper was racing to print the most disturbing images from the two bombings. I was keenly paranoid of where I sat and who was around me.

Was this the new state of mind I would have every time I came home? Strangely, everyone seemed to be alone in their thoughts. Around Kampala, life went on as everyone tried to make sense of the events of Sunday night. The overly crowded taxi parks in the informal sector were just as packed, the nightly street vendors still sold you a rolex with a smile. The boda boda drivers still snaked through Kampala’s gridlock like water through a rockslide.

The most heart-wrenching reality of the bombings manifested itself at the airport as I was departing. Lines of expats, and tourists choked the check in lines to a point where the computing system shut down for several hours. It seemed a mass exodus was in play. It became clear that the effects of the bombings would spread beyond the loss of 76 lives. In contrast to South Africa’s .5% bump in GDP brought on by hosting the games, right here at Entebbe, Uganda’s tourism industry was bleeding massively. I immediately understood the somber countenance of John Hunwick, proprietor of Backpackers Kampala hostel, as I waved goodbye.

Instability in the city meant no tourists, volunteers, or traveling students – which spelt financial disaster for the hostel. Mr. Hunwick’s hospitality and tourism business depended on the assumption that it was safe to travel to Uganda. Kampala’s once vibrant nightlife won’t be the same for a long time as revelers avoid crowded establishments.

As I touch down in the fifth city this week, I am still haunted by the images of the zombie-like corpses on the front pages. Men and women, soaked in blood and frozen in repose in their plastic chairs on the lawns of the rugby grounds; a woman clutching a soft drink with her head slumped to the side, a man leaning in the chair clutching a cellphone on one ear. The most haunting image that I can’t shake is when I was driving by the rugby grounds days after the bombings and watching the massive prehistoric scavenger birds — famous for feasting on Kampala’s growing garbage dumps — land on the pitch. I couldn’t bare the thought of what they were feeding on in the grass.

So where do we go from here? How do we rebuilt our city? How do we sell stability again and inject customers back into the tourism sector and related businesses? How do we avoid sinking into a relentless cycle of xenophobic violence? President Museveni has vowed not to be intimidated and has called for a state of calm. Uganda’s continued presence in Somalia as part of the African Union’s peace-keeping mission means that we are now on a continued terror alert as al Shabab begins to retaliate beyond its borders. I suppose I have no choice but to resign to the fact that this is our new life now,  “…in blood and color.” Is this the price of progress and freedom? Please stay tuned.

{ Comments on this entry are closed }

Africa 3.0: Technology and Media in Africa

In June 2010, I had the pleasure of presenting at Grantmakers in Film + Electronic Media (GFEM)’s first Conversation. My task was to comment on the state of/ future of media, technology, and access to information on the continent. A fairly sizable task to accomplish in a 10-minute presentation.

The best part about the opportunity was that not only was I able to talk about the state of technology on the continent, but I was able to actually demonstrate it. I was fortunate enough to be in Kampala and have access the Appfrica Labs/Hive Colab working spaces. There was adequate bandwidth for me to do the presentation over Skype using screen share.

In June 2010, I had the pleasure of presenting at Grantmakers in Film + Electronic Media (GFEM)’s first Conversation. My task was to comment on the state of/ future of media, technology, and access to information on the continent. A fairly sizable task to accomplish in a 10-minute presentation.

The best part about the opportunity was that not only was I able to talk about the state of technology on the continent, but I was able to actually demonstrate it. I was fortunate enough to be in Kampala and have access the Appfrica Labs/Hive Colab working spaces.  There was adequate bandwidth for me to do the presentation over Skype using screen share.

{ Comments on this entry are closed }

DiasporaCamp DC 2010 to focus on financial innovations for African SMEs

New gems from Women of Kireka!

For a long time, Uganda’s value has…

Tanzania is a country which lies on…

Last year I engaged in a very…

Kids of Kireka: Time to Get Back to School!

The time has come to raise funds…

Although I have not been around that…

We here at PD, are happy to…

FOUND: The 1 millionth stupid idea by wannabe do gooders

Correct me if I am wrong, but…

On Malaria in Africa

Kim Bilmer (above) began working as a…

Women of Kireka, a program under Project…

A week ago, team PD had the…

This past weekend, we attended Maurice Kirya’s…

The New York Times came up with…

Diasporique site does Afro-centric style with a flair for mystery

OK, so you have to help me…

The EAC is kicking off the 3rd…

I think I speak for a majority…

If you have been following the on-going…

I have recently joined an international team…

Africa 3.0: What’s all this connectivity good for?

There’s been a dearth of posts on…