Under the African Carpet 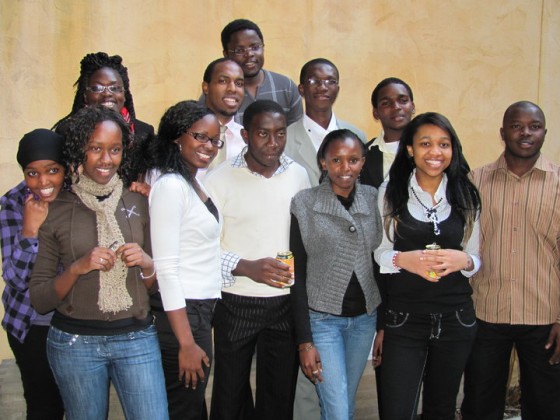 Countries are a lot like persons. As a political science student, you learn to appreciate countries, their histories, their idiosyncrasies, their weakness, their strengths. And your textbooks are replete with personifications: France denounced the UK’s proposal in the European Union; Canada is seeking to be a member of the UN Security Council; Russia invaded Georgia; America prepares to occupy Iraq; China is the sleeping giant that has awoken. Even country leaders are immediately identified with their countries. A typical news headline reads something like: Obama meets with Harper to conclude the trade agreement. Queen Elizabeth of England and Nicholas Sarkozy of France landed in Copenhagen this morning. We all understand this. But when Goodluck Jonathan and Yahya Jammeh meet, a synthesis automatically occurs, they are stripped of their personal and national identities, the African blanket is tossed over them and the headline becomes “African leaders meet to discuss bla bla bla.” Of course, later on, the article will explain that they are from Nigeria and the Gambia but that regional identity has taken centre stage.

I’m not trying to stir up unnecessary controversy and I understand that if Ghana, Nigeria, Liberia, South Africa, Zimbabwe and Malawi are represented at an event, there is no reason one can’t say that it is an African event. But when you invite one speaker from the DRC and one speaker from Nigeria to talk about those countries, is that enough reason to call the event, “Current Issues in Africa”? I mean, where do you draw the line? Will people not show up if it was called “Current Events in Nigeria and the DRC”? Have people become so obsessed with this concept of Africa that they cannot accommodate country identities? Will we ever be content with learning about countries without wanting to draw comparisons to other parts of the region to justify our generalizations and theories?

This is not an exclusive attack against Western institutions. Even so-called Africans are guilty of it too. The young boy telling his friends that “in Africa, we eat Kenke every day” when the only country he’s been to is Ghana sounds just as ridiculous. And the young woman who starts an initiative in Malawi but says on her website that she’s empowering girls in Africa is just as guilty as the young boy in my class who proudly announces that he’s been to England, Argentina and Africa.

Think of it this way: imagine that your name was Chioma but every time you did something, whether you won something or broke something, people would say “Amaka’s daughter did it”, or “one of Amaka’s daughters did it”. Imagine that people always knew you in relation to Amaka and everything you said became an affirmation of Amaka’s qualities or a pointer to how Amaka’s daughters acted, were known to act or were supposed to act. No one knew about your individual struggles or that none of your sisters could sing they way you did, or it wasn’t your mother’s idea to study medicine. No one knew why your father had called you “Chioma”. It was never about you. Imagine that you lived in the diaspora and were called “African girl” by your peers and everything you did was tied to this larger region called Africa, everything you wrote became African literature, everything you asserted became an African point of view, never mind that you knew next to nothing about South Africa or what somebody from Burkina Faso was called.

Certain countries have been able, because of the key role they’ve played in world politics, to make a name for themselves. But as others try to ascend, as others struggle, fall, rise, win, lose within the system; as others seek to define and redefine themselves, they keep getting thrown under the group carpet. As my pan-Africanist vision grows, I keep wanting to relate to several parts of the continent, to draw comparisons between their pre-colonial, colonial and post-independence struggles, or economic indicators or popular mobilization strategies. But I also realize that every country has its own idiosyncrasies, and even so, every country is itself a plural society. And I wonder: as far as politics and economics and everyday banter go, why aren’t we content with saying we come from Djibouti or that we went to an Eritrean restaurant. If our concern is that people won’t know where or what we are talking about, isn’t talking about it the best way to create awareness? As Pan-Africanism and globalization and the internet make the world an even smaller village, will we ever be content with learning or talking about one country and appreciating it in its own right or will we continue sweeping beautiful countries under the African carpet?

Brilliant article, makes so much sense. Funny how the most diverse continent on earth is so over-generalized.

Previous post: Rebranding Africa: Let’s Simply Start by Connecting the Dots for a Kid in Podunk!

Next post: What We Can All Learn from a Japanese Woman Affected by the Disaster and an African Woman Off-the-Grid