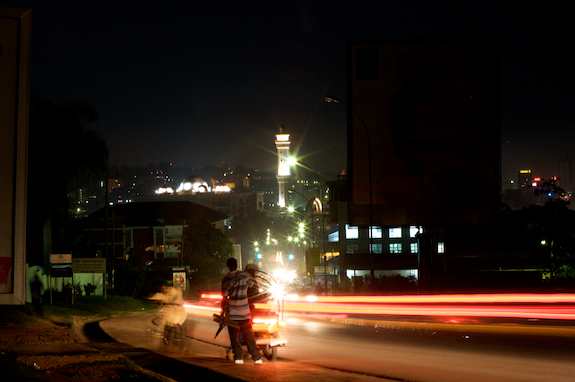 Last year I engaged in a very interesting e-mail discussion with friends from around the world. It all started with CNBC’s show “Dollars & Danger: Africa, The Final Investing Frontier”

The show could have used some work with the way it was edited and as an African I wanted to see my continent portrayed in a better fashion. The sad fact is that while Africa is a continent filled resources galore from our vast mineral wealth to fertile soils and warm hearted people, we find ourselves relegated to a third world status – with many of the poorest countries in the world. So we ask ourselves, “Why does Africa appear to have missed out on developing?” and “What will it take for us to ‘catch up’ with the rest of the world?”

After a long discourse it boiled down to two main items, a good education for all and effective policy that works.

The fact that 45% of Africa’s sub Sahara population is under 15 years old must raise a red flag in ones mind. Imagine what Africa could be if the next generation of Africa is educated in a new way; one in which a new breed of problem solving Africans is created, with tools needed to think critically and meet our problems head on with home grown solutions. This could be and should be our new future!

There is an old British saying, “you can’t teach an old dog new tricks”. Likewise, we need to start with a clean slate, with the young pure and unadulterated minds of our three to six year olds. Educators and scientists tell us that our character is formed at a very early age; by the time one is six or seven their temperament is set. That’s why we need to start early. We all know how innately curious young two and three years olds are, engineering educators say that we “beat” the engineering out of our children when we fail to satiate their curiosity and teach them how to channel it constructively. A paradigm shift in our approach to education is called for, one in which our children’s minds will continuously be challenged to come up with creative solutions to problems with real life applications. Whatever is learned or dreamed up needs to be proved not only theoretically but also practically in the “real” world.

The East African Community (Kenya, Burundi, Rwanda, Tanzania and Uganda) has entered into a partnership with the nonprofit OLPC (One Laptop Per Child), they plan to equip each primary school student in East Africa with a laptop by 2015! The estimated number for computers for this is 30 million and at $250 each the cost for this will be around 7.5 billion USD. This is a bold initiative by the East African Community that should be backed up by a new syllabus that is appropriate and relevant for this day and age. OLPC’s press release last month included the following statement from Nicholas Negroponte, founder and chairman of the nonprofit.

“OLPC’s partnership with the East African Community represents another significant step toward a world in which every child has access to a world-class education, to the world’s body of knowledge, and to each other,” Negroponte said. “The East African Community is dedicating itself not simply to One Laptop per Child, but to a world in which the children become agents of change – making things, teaching each other and their families and affecting the social development of their community.”

The laptops alone will not save our educational program. They come equipped with tailor made educational material and thousands of textbooks, which is good, but we need to insure that a new syllabus is created to go along with the OLPC initiative that focuses on encouraging creativity and developing problem solving skills. Intel has a K12 program, which employs such a syllabus. We should take advantage and make use of emerging fields like Engineering Education, which focuses on addressing the way children are educated. Such bold initiatives need to be adopted all across the continent for there is no better investment that a people can make like investing in their children for they are our future.

This new breed of Africans of well-educated people will be able to fashion policy that works and serves us well. The Ghanaian economist Dr. George Ayittey calls them the “http://www.ted.com/talks/george_ayittey_on_cheetahs_vs_hippos.html” fast-moving, entrepreneurial leaders and citizens who will rebuild Africa. The new Africa will be not only be well educated, but will also know how to think. It’s one thing to teach pupils how to memorize dates and stuff but another to engage and mold young minds in a fashion that enables them to have independent thought, to be innovative and creative. Only then will we be able to come up with new ways and solutions to address the problems that we face today and become serious players on the world stage.

The interventions needed for Africa are not simple nor one sided. Only a holistic approach will work. So when a call for educational reform rings out, we should not forget about those already in the system. Their needs must be addressed as well with adult education classes and trade skills that will enable them to contribute meaningfully to society and support themselves. Corruption that is endemic in many African countries must be addressed at the root. A well-informed population that exercises it’s right to be governed well is a good start. It won’t solve all the problems we have overnight like water & food security, health issues and poverty and it’s related problems but will provide our people with the tools they need to create solutions to address them. An inscription on the first public library in the USA (the Boston Public Library) reads, “The Commonwealth Requires The Education Of The People As The Safeguard of Order And Liberty”. We need good quality education for all in Africa as it will serve as a safeguard to order and liberty and will enable us to rapidly develop our communities.

The second item Policy can have far reaching and more immediate effect. Our leaders and lawmakers need to formulate better and more effective policy, which must be grounded in a firm understanding of the issues at hand, it needs to be realistic in relation to our given set of circumstances. The economist Paul Collier in his book the bottom billion argues for improved trade policies to help the poorest countries. We also need good internal policies to run our countries well.

Another economist Hernando de Soto in his book “The Mystery of Capitalism: Why Capitalism Triumphs in the West and Fails Everywhere Else” says:

property only becomes useful capital when it is legally recognized by a formal legal system, since it is only when it is formally titled that its potential can be harnessed for loans, taxes, and security.

As De Soto traces the development of the US economy, it becomes apparent that American economic stability and growth only flourished once the majority of its citizens achieved property rights and were integrated into a legal titling system.

This is a good example of how legislation that provided strong property rights enabled nations like the USA to develop. We all know that we need to have the rule of law for they’re to be justice and peace in our land. However, we also need good laws and good policies for us to abide by. Poor policy is detrimental to our development and therefore does not serve us well even though it’s adhered to strictly.

It is refreshing to note that our governments are starting to realize the importance of good legislation that protects local and foreign investments. As African countries work to lure investors to our lands we are challenged by investors to have strong property rights to protect their investments. Tanzania is in the process of working to use investment bonds to fund massive infrastructure project like a multi-billion dollar railway line to Rwanda. A limitation to this and other international investment is their weak legislation. Minister Kawambwa recently said:

“We need legislation that protects somebody’s investment. If you don’t have the requisite legislation, then the risk levels are high and it is very difficult to attract someone to come and invest,” Strong policy that protects people’s property rights is needed to encourage and protect our investments both local and foreign.

When we have addressed education adequately, we will then be in position to write good policies and laws for our land. This will provide a conducive environment for us to develop socially, politically and economically. Our prosperity will then serve as our defense against anarchy as we will all have a vested interest in maintaining the status quo.

What’s proposed here is not a simplistic solution to the multitude of problems that face many African countries today, but I believe that good education for all and strong effective policy that works will provide us with a good solid foundation to build a better Africa.

i am a private Investor.I invest my money in only good business

proposal that will generate a good return to its share

proposal.I am looking forward to hear from you.free to

Wonderful post! In regards to the education side of things- I refer to it as access to knowledge or access to information. This seems to be the missing ingredient in many communities. Kids and adults need to have access to information to enable them to creatively tackle challenges within their communities. And the big picture policy and infrastructure provide support to help enable this individual transformation and local change.

I learned a while back that Ugandan teachers are given the syllabus and told what to teach- this happens in many countries around the world. In Canada teachers have more freedom to develop their own classes. Perhaps this is where we would see more creativity in the classrooms? An inspired teacher would be better equipped to inspire students.

Previous post: Kids of Kireka: Time to Get Back to School!