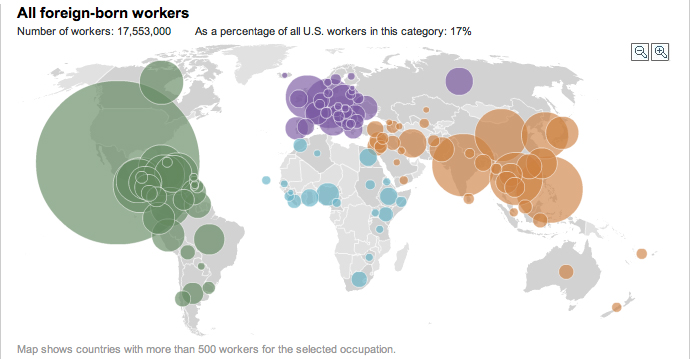 The New York Times came up with a very interesting info graphic on the occupations of immigrants to the United States. The graph sampled immigrants in various sectors of the US market and provided some really interesting results. And of course we salivated over any data that had to do with Africa’s Diaspora. Broken down below are some interesting demographic breakdowns from the interactive chart for your perusal. Absence of the other African countries could be attributed to the fact that the map only represents countries with more than 500 workers.

As an aside, it is nice to see a demographic breakdown that doesn’t lump all of Africa’s countries into one entity.

The low representation could be attributed to many factors, including tight immigration laws that have limited entry of African immigrants into the country and geographic distance that would further limit illegal immigration. This is a geographic advantage enjoyed by Mexico and other Central American republics. Mexico has the highest number of immigrants working in the United States. This last assumption has a flaw however, as it doesn’t explain why India (which if farther East than Africa) holds the number 2 spot in number of immigrants to the country.

Viewed purely by category of occupation, Africa is lacking a noticeable presence in the engineering and architecture fields, with only Nigeria and South Africa representing in this professional category. No African country represented in the “construction and production supervisor” category.  (This could be quite telling if you look at this from a developmental stance. Most of the  civil engineering, architectural, and construction in Africa is being done by foreign enties – mainly China.)

It also seems like there is a lack of writers and artists, with no African countries cracking the 500 head count minimum for that category. Also very telling considering a total population just over 1 billion people. Even if you were to hypothetically attribute 499 per country, that would only account for 26,447 artists for the whole continent. Way less than 1%.

However, Africans represented fairly well in the “managers & administrators” category with most of the 20 countries showing a presence. Ditto for the “drivers and other transportation workers,” “nursing aides, orderlies and legal professionals” categories.

If you want your hair “did,” chances are your stylist will be Senegalese, the lone Diaspora population represented in this line of work in the country. Likewise, the chance are high you are going to run into a Guinean driver or transportation worker, the country was the lone entrant in this category.

Overall, African immigrants have a very good presence in the “business and technical professions” occupational category. Now, if we can just get them to bring some of that knowledge home.

Previous post: Diasporique site does Afro-centric style with a flair for mystery