I dedicate this blog posting to all the victims and survivors of natural and man-made disasters.

Yesterday morning I woke up to the horrifying news about the earthquake in Japan, which as if that wasn’t enough, was followed by a tsunami, possible radiation exposure and forecasts of another, and most likely, more devastating earthquake.  As I write this piece, I send prayers for those affected by the devastation and hope that the situation does not escalate beyond the unimaginable damage and destruction that has already occurred. 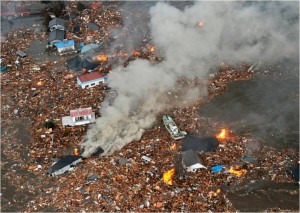 Houses swept by a tsunami smoulder near Sendai Airport in Japan. (Reuters)

At times like these, we question the value of life which can be interrupted or even destroyed without a moment’s notice — robbing us of precious opportunities to communicate for the last time with loved ones.  Case in point is the well-publicized natural devastations our planet has suffered in less than ten years, including: Hurricane Katrina in 2005, the 2006 tsunami in Asia, and last year’s earthquake in Haiti.  Please note that I highlight the aforementioned, recognizing that there are numerous other natural devastations, and countless man-made conflicts that have and continue to devastate our precious Earth.  Many have and will continue to say that these natural and man-made disasters are signs of disapproval from God, Mother Nature and/or our planet — about the way we increasingly mistreat one another and abuse our planet.  Whatever your belief, my opinion is that we had better put our differences aside and start learning lessons from what is happening globally, to find a safer way forward.

Personally, as I kept reading about the escalating situation in Japan and environs throughout yesterday, I was inspired to think about how those of us outside of the immediate devastation could use it to prepare to do some good for others.  From what I understand, many places in Japan have been leveled to the point where the country is effectively at par with if not below those so-called third-world countries has been disrupted if not completely destroyed, which seriously impedes search and rescue efforts.

While researching topics for an emergency and disaster preparedness forum I organized in 2005, I learned that in short- and long-term crisis situations, communication is one of the most important tools for people.   Through communication, affected people are able to determine the severity of their immediate condition, gather and share information that can help them and outside help to improve their situation and mitigate further threats.  Specifically, a woman survivor of the earthquake and tsunami in Japan, needs information that will (a) enable her to understand if she was in the epicenter of the earthquake (b) if there are any aftershocks predicted (c) if there is criminal activity around her, against which she needs to safeguard her family (d) what she needs to do to signal for assistance (e) if rescue and relief are on the way.  Similarly, an African woman survivor of civil unrest living in a village that is off the communication grid, needs to communicate in the same manner as her Japanese counterpart described above.

The challenge is how will the women in the aforementioned scenarios obtain and share vital information when the communication tools that those of us in unaffected areas take for granted are not available to either one of them?

Mobile communication via SMS messaging is one viable answer.  Earlier this week, I fortuitously served on a panel organized by a colleague Marcia Stepanek, at New York University’s Heyman Center for Philanthropy and Fundraising, entitled: Philanthropy 3.0 Speaker Series: Mobile in Advocacy The Next Frontier.  During the panel, I shared with and learned from my fellow panelists, insights about how mobile communication has and continues to be used to further causes.  We learned about the great work that FrontlineSMS is doing to increase vital information flow in various African countries, through the use instantaneous SMS two-way communication.  We also learned about the impact Ushahidi’s free and open-source, crisis mapping software has made on disaster situations, during conflicts and the tracking of political activity.  We also learned about the importance of the Twitter and Google’s Speak-2-Tweet service to information exchange –despite the Internet blackout– during the Egyptian revolution.  While all of these are incredibly enabling technologies, it is not possible to use them in situations where the vital communication grid necessary to transmit voices or even data, has been destroyed or never existed.

What would work in my view, is the use of satellite, for emergency disaster situations any where in the world and for off-the-grid areas in developing countries.  I know that satellite communication is successfully used by military personnel in conflict situations requiring off-the-grid communications and believe, we need to learn from them.  Specifically, what I propose is that governments identify vetted people in various locations including the remotest areas in their respective countries, known as connectors or influencers, to be the safe guarders of satellite phones, which in most situations should work.  Such people (with backup people for redundancy), keeping the video phones on them at all times, implanted with satellite transmitters, and trained to effectively serve as contact points responsible for communicating within and without their respective communities (aided by a support network), any vital information that would help ultimately save lives.  Should the safe guarders die, they and/or their phones could be tracked via satellite and the video switched on remotely, to record surrounding activity.  The same information would be quite useful for off the grid communities — enabling the tracking of threats, facilitating rescue missions and monitoring activity.

I welcome any ideas, suggestions and  innovations that would benefit the two fictitious women I mentioned above.  So while we are unable to change what has happened, I believe we are able to take action today, to make a better future.  I really do hope that we come together as a human race to effectively address our common problems.

I did some research for a charity business organization in Vancouver that specializes in this sort of thing (kinda). They basically provide fundraising solutions for charity organizations and/or improve communication techniques for charities. I can tweet you their info, if you are ever interested in knowing more about this …

Thanks for your comments and please feel free to share, I really would like to hear what others think about what I've proposed. Please feel to tweet the information about the Vancouver business organization. Peace, Liz

Thanks for posting this. Its very insightful and futuristic… something for us to ponder

Next post: A glance at the events in Libya